We are delighted to announce that we will be awarding the first Trainer of the Year award at our Autumn 2020 meeting.

We have only be able to do this following a generous donation from the family of Dr William A Copland, with this statement from the Copland family:

The SRS Trainer of The Year award is sponsored by the family of the late Dr William A Copland, SRS President 1984-85.

Bill Copland (1924 to 2017) was born and raised in Aberdeen, the city and Aberdeenshire remained dear to him throughout his long life. An Aberdeen Medical Graduate, he spent two years at sea with the RNR then trained in Radiology in Bristol and London in the early 1950s. He came to live in Edinburgh in 1956, working at the Northern and Western General Hospitals and teaching Radiology in the city.

He enjoyed his working years greatly, sometimes introducing new ideas in his own inimitable way.

He always enjoyed learning and teaching. He was always energetic and enthusiastic, with many interests. His kindness and concern for others was always to the fore. He had an admirable capacity for light heartedness, which continued into his later years, and a great sense of humour. He was sociable and outgoing. He appreciated his long and active years of retirement, with his wife, Dr June Copland, enjoying travel, sailing and golf among many other pursuits.

His family sincerely thank the SRS for this opportunity to remember Bill in a way he would have wholeheartedly endorsed. 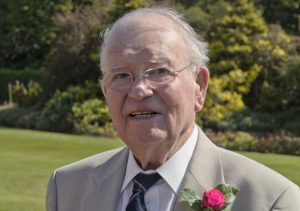 This award will be nominated by trainees in the region hosting each year’s SRS Autumn meeting, with the inaugural 2020 award  announced at the AGM as part of the virtual Aberdeen meeting.

The first recipient of the Copland Trainer of the Year award was Dr Sandy Forbat, nominated by trainees from the North of Scotland.