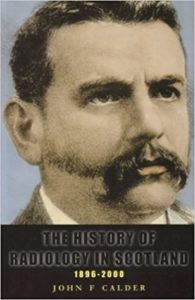 On 10th October 1936 a meeting of the British Institute of Radiology was held in the Western Infirmary, Glasgow. Twenty two members were present. Eight meetings of this branch were held before the outbreak of the Second World War in 1939 and two further meetings were held in 1946 after the end of hostilities. The minutes of the pre-war meetings indicate a happy mixture of scientific discussion and social activities including golf where the venue was appropriate.

In 1946 in anticipation of the forthcoming National Health Service Insurance Act, it was agreed to ballot all the radiologists in Scotland on three proposals: Future meetings of radiologists resident in Scotland should be held 1. As a Scottish Branch of the Faculty of Radiologists proposed by Dr Robert McWhirter; 2. As a Scottish Branch of the British Institute of Radiology proposed by Dr Campbell Tainsh; 3. As a Scottish Radiological Society without affiliation to any other society proposed by Dr John Blewett. The first proposal was carried by a large majority. However, following an account of the attitude of the Faculty of Radiologists to a Scottish section and after considerable discussion, it was agreed unanimously that future meetings should be informal and unaffiliated to any other society.

The first meeting of an unaffiliated Scottish Radiological Society was held on 21st September 1946 with 15 members present. The chairman, Dr David P Levack of Aberdeen, an ex-POW, gave an account of mass radiography carried out by the German medical services in Oflag VIIIB in the spring of 1944. One thousand five hundred prisoners were examined. Only 10 cases of suspected pulmonary disease were found of which two proved to be open pulmonary tuberculosis. A description was given of the general difficulties encountered in getting the co-operation of the British camp authorities and the prisoners themselves and the unfortunate decision, against medical advice, to make the examination voluntary. Dr John Blewett read a paper on control of stray radiation using the photometric method. At the December meeting in 1946 Dr J B McWhirter of Dumfries pressed for action to be taken with regard to the supply of radium for the treatment of non-malignant gynaecological cases in local hospitals. He had been refused a supply by the Radium Commission on the grounds that there was lack of general x- ray control.

In 1947 with the National Health Service imminent, the members discussed again the advisability of affiliation to the Faculty of Radiologists or the British Institute of Radiology but decided to remain independent and to indicate to the Chief Medical Officer of the Department of Health for Scotland that the Society was constituted and prepared to enter into consultation with the department on matters affecting radiology and radiologists in Scotland.

An annual subscription of five shillings was agreed to meet all expenses.

The minutes of the next few meetings are succinct summaries of the scientific papers but in 1950 the question was raised as to whether the Society should have a politico-advisory role in addition to its scientific and social activities. Despite a dislike for medical politics expressed by some members, it was agreed to implement the original pre-war concept of a society which could represent the views of its members to the Scottish Home and Health Department. An executive council was set up with power to deal directly with matters political or of wide administrative interest to radiologists in Scotland. The first Chairman of the SRS Council was Dr J B King who, together with Prof R McWhirter, are revealed in the minutes as the guiding mentors of the Society in the early days of the National Health Service.

Two pounds presented to the Society in 1950, representing the balance of funds from the recent meeting of the International Radiological Society in Scotland, were directed towards general secretarial expenses in the SRS.

It is of interest to note that in 1951 the Society agreed to the principle of open access for general practitioners although over 20 years were to pass before this was fully implemented in the Health Service. In 1954 the constitution was amended to make Council responsible to the Society. The first report of Council was circulated at the AGM in 1956.

Dinner at a private room in Gleneagles Hotel on 31st May 1958 after the AGM cost the members £1 2s 6d each. Those wishing to dance were charged a further half crown and were in addition required to wear formal evening dress!

A memorandum on the radiological services in Scotland prepared by the radiological services sub-committee in June 1958 showed that since the inception of the NHS, workload had increased by approximately 80% in a seven year period. Among scientific papers in 1960 was an early description of Crohn’s disease affecting the large bowel, a talk by W Court Brown on chromosomal abnormalities in leukaemia with the suggestion that medical radiation played a part in the production of chromosomal abnormalities, and a description of ciné-radiography using the new image intensifiers – all original topics.

An annual lecture in memory of Dr John McGibbon, a greatly admired Edinburgh radiologist and a pioneer of cardiac radiology, was endowed in the early 60s. A grant from the European Association of Radiology following a successful meeting in Edinburgh in 1974 made it possible to re-endow the lecture in 1974 as a continuing academic memorial.

A presidential badge of office was presented in 1962 by a distinguished therapist, Dr J C Davidson of Glasgow, in memory of his mother. The design and manufacture of the insignia were specially commissioned by Dr Davidson from John Leckie Auld of Glasgow School of Art. A thistle suspension was introduced in place of a more medical symbol originally planned, to emphasise the Scottish identity. The centre consists of a perfect flawless crystal cut to scintillate light. This symbolised the sun, the principal source of light and radioactivity. Rays, both wave-like white and straight piercing gold, radiate into space bounded by a blue annullet of enamel. The original design placed the cabochon cut garnets on the front of the enamel but this was changed to the edge to accommodate the title of the Society. The garnets represent electrons in orbit as it was felt that this reflected some similarity in atomic structure and the solar arrangement of matter. A miniature replica of the badge is presented to retiring presidents of the Society.

In 1970 the Society acquired a permanent address at the Royal College of Physicians in Queen Street, Edinburgh with storage for its accumulating records and documents in the library of the college. The membership exceeded 200 in 1972 with approximately 150 diagnostic and 50 therapy members. In the early 1970s, impending re-organisation of the Health Service produced several important changes. In October 1970 the Scottish Committee for Medical Services (SCMS) resolved not to re-appoint the services sub-committees which had been in existence and had served a useful role since the early days of the NHS. Following publication of the Zuckerman report in 1971, which affected professional relationships between radiologists and radiographers, the question of a formal association between the Society and the Faculty of Radiologists (which was about to achieve collegiate status) was raised again as it appeared that advice on matters radiological in Scotland was likely to be sought from the Faculty. A Standing Scottish Committee of the Faculty was formed at the suggestion of Scottish radiologists to allow the Faculty to obtain a comprehensive opinion on relevant matters presented by the Department of Home and Health for Scotland and other bodies. This was of real importance because of the differences in the Health Acts in England and Wales and in Scotland. With the establishment of the Standing Scottish Committee of the Faculty of Radiologists, the early wish of the Society for association with the Faculty was eventually realised. The considerable achievement of Prof Howard Middlemiss and the Society’s president, Dr J Hunter Cummack, in arranging a harmonious relationship, was timely. Shortly afterwards the Faculty achieved collegiate status and a royal charter. Dr Keith Halnan was appointed first Chairman of the Standing Scottish Committee which took over much of the medico-political business of the Society. One of the committee’s first actions was to establish a radiographer liaison committee in Scotland. Methods of identifying workload in departments of radiology in Scotland were examined and the Foresterhill system adopted.

The role of the Society was reviewed again by its members in the 1970s in the light of its new association with the Royal College of Radiologists. It was agreed that the SRS had a special role in Scotland particularly through its scientific meetings. A Kodak prize was established in 1973 and awarded annually to the best paper given by a junior member at an annual meeting. The Bristol Myers prize was donated in 1987 for the best paper given by a junior radiotherapist. A Scottish Radiological Travelling Fellowship was funded by Nycomed in 1988 to support junior consultants and others wishing to undertake a period of study at a recognised centre of excellence. A later decision of Council broadened the scope of the fellowship so that any member is now entitled to apply.

Members and their families have enjoyed meeting in some of the most prestigious and beautiful locations in Scotland including Edinburgh Castle, Glasgow City Chambers, the ancient universities of Aberdeen and St. Andrew’s and the Highlands. A Röntgen centenary meeting was held in Stirling in 1995, with the dinner in Stirling Castle attended by distinguished guests including the presidents of the Scottish Royal Colleges and three Albanian radiologists who were visiting Glasgow at the time.

Joint meetings with radiologists in the North of England and in Ireland were arranged and the Society participated actively in joint meetings with the Royal College and British Institute of Radiology. A joint meeting with the University of Connecticut was held in Scotland in 1984. In recent years the Society has been more adventurous and overseas meetings have been organised in Cairo with the Egyptian Society of Radiology and Nuclear Medicine in 1992, in Cyprus with the Cyprus Radiological Society in 1994, and in Mombasa with the Kenya Association of Radiologists in 1997.

A joint millennium meeting with the Royal College of Radiologists has been organised and will take place in Edinburgh in March 2000.

After more than half a century the Society, with a membership of over 300, including several overseas and honorary members, anticipates continuing its special role in furthering radiology in Scotland.

The Society now has its own web site with information about itself and its office bearers and also a collection of images for teaching and demonstration. The web site was first set up and managed by Dr Andrew Downie of the Victoria Infirmary, Glasgow.

The SRS may have a few remaining copies of Dr Calder’s book; these are available to SRS members on application to the Honorary Secretary, on a first come, first served basis.